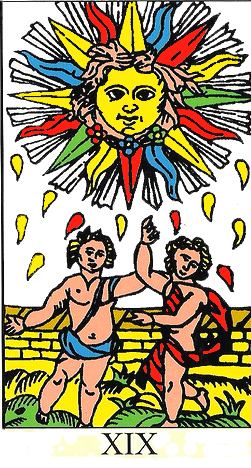 The sum of the digits of our identity number, 1468, gives 19. The number 19 is karmic number – Karma is the eternal law , according to which everyone reaps the fruits of his actions – that puts into contact something bigger and older.

In the Tarot the number 19 indicates the greater Arcanum called Sun: the nineteenth depicts two young men dancing , or playing , in harmony under the rays of a large sun: behind them a low wall , and all around water drops and small flames that seem to converge towards the sun . The scene depicted gives an idea of harmony , joy and serenity .
In this card the temporary power and the spiritual one , who are in conflict with each other in the previous card of the Moon , are represented by two children playing in harmony and in the light of the sun . Also the limit of their action , represented by the wall behind them , are easily overcome : intuition and reason are again back in agreement , and allow any initiative . The Sun’s rays are both undulating and straights , and further strengthen the union between the material and spiritual natures .

Also in the alchemical tradition this is a symbolism of unity , which preludes to the conclusion of the Work : After the reactive and catastrophic phase represented by the three previous cards ( Tower , Stars and the Moon ) the natures that had been separated find their dynamic equilibrium , and are subject to last heating intended to render them virtually immortal , besides perfectly pure.

Kabbalistic tradition attributes to this card the letter QOPH , the number 100 , and connections with the astrological Sun and with the sign of Gemini.

Esoteric tradition associates the card to the sign of Pisces .

In terms of the spirit the sun represents the power that comes from the integration between the universal and the particular. On the level of the soul represents the affinities , the balance between knowledge and emotion . On the physical level is representative of balanced conciliation of energies. As an indicator of result it’s a very wishful one : it indicates that the goal is fully within reach . As an initial card , or as a premise, it indicates the presence of balance and serenity , both excellent tools to undertake their own initiatives.

As a transition between past and future signifies that no obstacle will block the road taken . Even when it indicates a possible obstacle it doesn’t result particularly dangerous and indicates that the eventual obstacles will be perfectly identifiable and will require only a little patience to be overcome.