“We hold these truths to be self-evident ; that all men are created equal , that they are endowed by their Creator with certain unalienable Rights , that among these are Life , Liberty and the pursuit of Happiness.”

Thomas Jefferson was the third president of the United Sates , a man of Enlightenment. He was theorist and author of a secular and liberal State and supported legal and formal egalitarianism of all human beings , while never ever speak out against slavery . It was also an intellectual of great depth ; his face on Mount Rushmore represents the growth of the United States and is placed immediately after the face of George Washington, that represents the Father of the Nation.

His alleged membership to our Order is not certain, but it is well  known that he attended several times , along with Brother Benjamin Franklin , the Meetings of the Lodge The Seven Sisters in Paris.

Of Jefferson , a man of deep and broad cultural interests , much is known compared to his government, but not everyone knows that  in order to conceal the exchange of  information between him and his colleagues, He  invented a special cipher known to history as the Jefferson roller or Wheel Cypher .

We know what you’re thinking when you see it; it looks like  the Cryptex invented by Dan Brown in The Da Vinci Code . It may appears so , but we ask You to analyze it more closely .

The roller is a mechanism composed of 26 wooden disks threaded on a metal rod on whose rim are engraved , scattered , the  letters of the alphabet . If we wanted to encode a message with this method , it will be sufficient

to find the  letter to be transposed on the first roller and properly rotate the rollers, repeating this procedure for each letter. In order to decipher the message, it is sufficient that that the rollers of the sender and recipient of the encrypted message are set to the same frequency. In practice, the secret key of this method lies all in the structure of the cylinder : each wheel consists of a permutation of the 26 alphabetic characters ; the permutations of a wheel are 26! (4×10^26), the number of possible keys is 26!^N  where N is the number of wheels . We leave You with the solving of the problem.

No vinegar then, as in the Da Vinci Code, but much more elegant and ” cryptic ” for the Priory of Sion…

While wishing you happy holidays, taking into account what has just been written and that this is the season of riddles, we leave you with a little riddle and a suggestion for a possible holiday: the tomb you see is of Brother Jamess Leeton , who died on September 28 , 1794, at only 38 years old. The plaque is located on the Trinity Church in New York . Try to decipher the phrase engraved, perhaps to the most it will not say much but, remember,  not always what it seems is what it is . 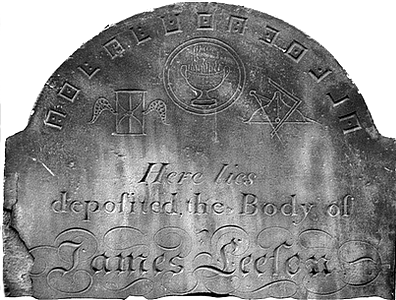 And if by chance you were to stretch your vacation, you might also consider to decipher the symbolic images engraved or, otherwise, leave them to Robert Langdon …

From all of us to all of you , happy holidays .

We, as always , hang up the phone until the next Post.