Home » Blog » Knots and ropes : the esoteric wisdom of the Quipu

In the Inca’s Gold , the famous novel by the American author Clive Cussler , during a rescue Dirk Pitt , hero of Cussler’s novels , locates in the Amazon forest a mysterious object called quipu belonged to the deceased Inca civilization , capable , perhaps , to find the treasure of the last Inca king Huascar .

But what is a quipu ?

The Quipu is a symbolic registration system developed by the Incas . It is believed that they were used for astronomical calculations , essentials to the Inca culture, for magic formulas but also to briefly describe historical and economic events .
It is formed by a short and thick rope to which , at precise distances , are tied cords of different colors in groups of variable number according to a predetermined code ; along the cords knots are made to symbolize per number and per thickness numerical values .
Each color corresponds to a category of the elements while the set of different colors provides the recording class ; thus , once established the code, any event can be registered localizing it into space and time .
The colors of the ropes , the manner in which the ropes are connected to each other , the relative position of the cords , the spaces between the ropes , the types of knots used in the individual wires , and the relative position of the knots are all part of a logical – numerical recording.

Consequently the quipo becomes a high-precision system , only alterable by the operator itself – knots and the ligaments were first wet, dried and then welded with resin.
The various combinations of fiber types, colors, and intricate knotting, according to anthropologist Gary Urton of Harvard University, may well be a new form of written language. He argues that the quipu contain a seven-bit binary code capable of transmitting more than 1,500 separate units of information. The Quipu were knotted using a positional decimal system. A knot in a row away from the mainstream represents one, the next farthest ten, and so on. The absence of knots on a cord indicates a value of zero. 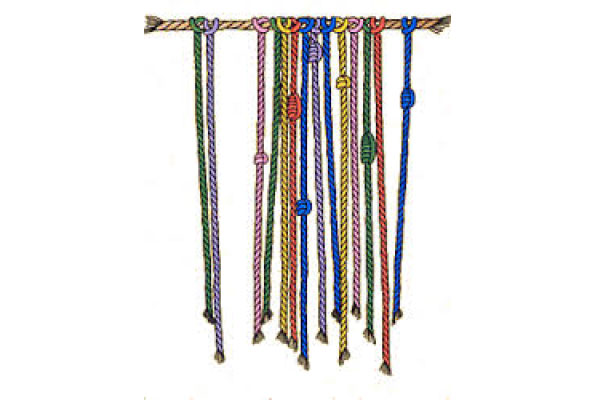 Despite his most prudent attitude, Professor John Alden Mason, Curator Emeritus of the American Museum of Antiquities of the University of Pennsylvania, in his book The Ancient Civilization of Peru, opens a door to the esotericism and the occult. The Qipu are ropes that have complicated knots – being in fact a form of extremely complex writing – could have served to express ideas or groups of abstract ideas and to pass on secrets and knowledges that were for the exclusive use of those who knew how to master this form of writing.

One of the best experts of quipu , Nordenskiöld , sees in them mathematical calculations , horoscopes based on a complex esoteric astrology , different methods of predicting the future. The question is of most importance: can there exist different writing forms to record the thought . Methods which still today are unknown to our advanced civilization. The quipou base knot is considered by modern mathematicians as one of the greatest mysteries . It is not possible that in an odd number of dimensions , impossible both in the plane and in the higher even areas: 4 , 6 , 2 sizes , and specialists were not able to study but the simplest knots . It is therefore likely that in the quipu are still contained today notions that we still do not possess.

This reflection may be enriched by the study of the Hopi language of the Indians of Central America, but that’s another story.

As always We hang up the phone, and we go tie our quipu .