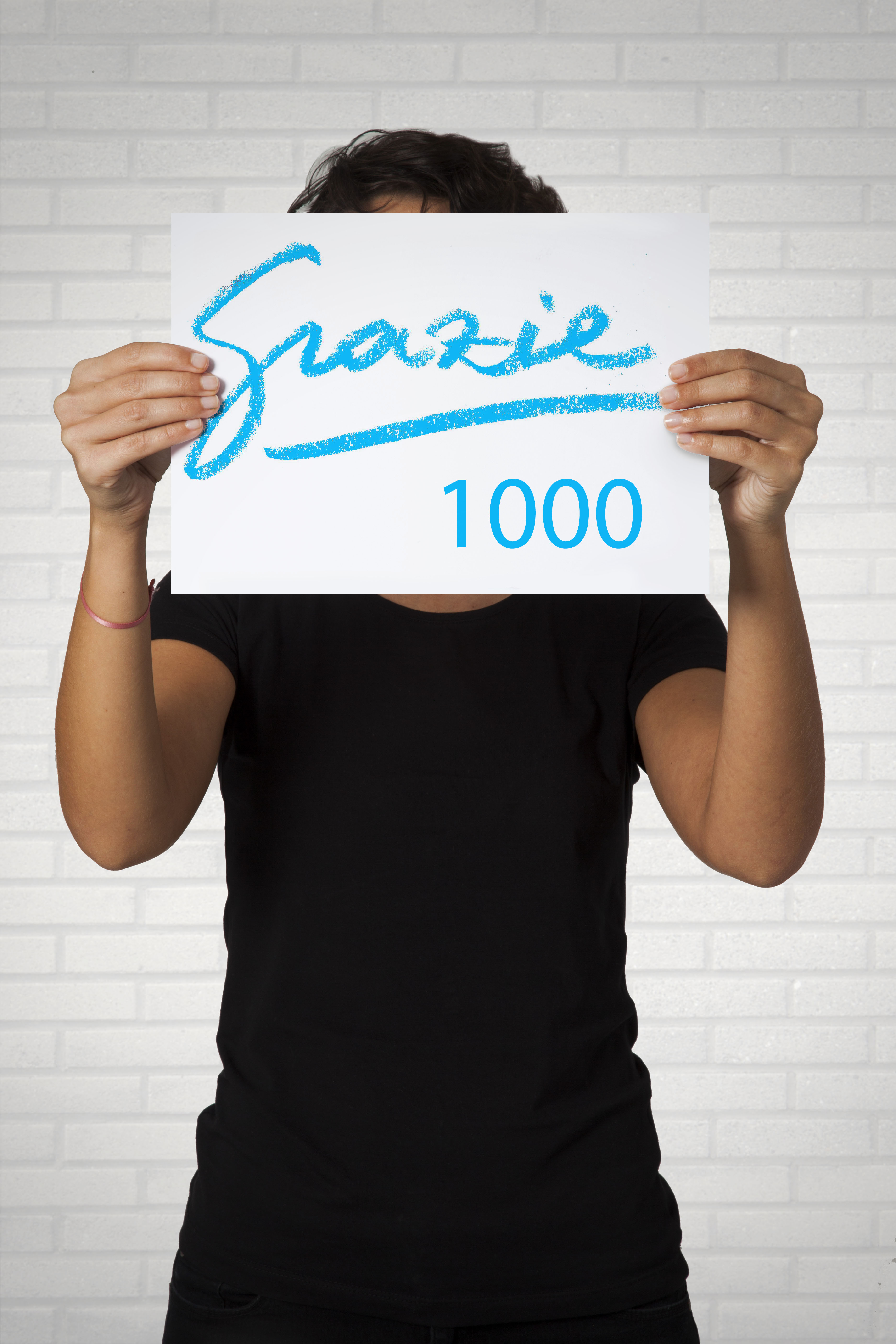 I know you are listening to me , I feel your presence. I know you are afraid of us , afraid of change . I do not know the future , I did not come here to tell you how it will end , I came to tell you how it will begin . Now I will hang up the phone and I’ll show all these people , what You do not want them to see . I will show them a world without you , a world without rules and controls , without borders and boundaries . A world where anything is possible . What happens next will depend on you and on them .

Keanu Reeves, NEO, on the phone in Matrix

Since June 16, 2015 , the day when we uploaded on the net our Lodge’s website, we have reached and exceeded 1000 visits.
A goal that honors us and that makes us even more responsible, but above all it pleases us because , through the appreciation to this website , we are able to tell about ourselves and about our path.
And now , without further indulges , we tell you why we like the number 1000:

An Now let’s try to interpret it in other numeric systems other than decimal one.
The first of these systems that comes to mind is the binary one, which is used by computers and takes as base two : in this case 1000 does not means ten by ten by ten, but two ( binary 0010 ) by two by two, that is eight.
And eight is an interesting number: eight are the triangular faces of the octahedron , which is one of the five regular solids disclosed by Plato in his Timaeus esoteric dialogue, in which it corresponds to air.
Another of these solids is the tetrahedron , which corresponds to fire: its name indicates that its faces are four , that in the binary system is written 0100 .
In the quaternary system 10 corresponds instead to four , and 1000 at four by four by four, that is 64. This is also an interesting number, being at the same time the square of eight , the cube of four and the sixth power of two: which means that 64 is written 100 base eight, 1000 in base four and 1000000 in base two .
Surely even more interesting is that 64 is the number of the hexagrams of the Book of Changes or I Ching , the famous divination Chinese book which was considered by Confucius the Book of Wisdom , which many still continue to consult at a divinatory level.
The same interpretation made with the number two can be repeated with the three .

In fact in the ternary system 1000 means three by three by three , that is 27 , and this was a magic number for the Pythagoreans : again in the Timaeus , Plato associates in fact the seven numbers 1 , 2 , 3 , 4 , 8 , 9 and 27 to the seven planets on the one hand , and to the seven notes they played in the cosmic music on the other, and notes that 27 is the sum of the remaining six numbers .
In the religious concept of the Indian Chakra , the seventh chakra is called Sahasrara , also known as the crown chakra or thousand-petalled lotus . Its symbol , in fact , is an inverted lotus of the 1000 petals: sahasra in Sanskrit means thousand.
The color of the symbol of the seventh chakra is purple, the color of illumination. Surrounded by its many petals, the chakra is represented as a flower because it can open or close , and its ” stem ” is in symbolic connection with Sushumna, the nadi or the most important energy channel that runs through human body .
Also the number 1000 is not random : it represents all possible Letters combinations ( 20 ) of the Sanskrit alphabet ( 50 ).
Finally, in Roman numerals, 1000 is denoted by the letter M which is also the twelfth letter of the Latin and Greek alphabet, and is also the thirteenth letter of the Hebrew and Phoenician alphabet , originated in France under the name of “mem ” that means ” water ” , its name comes from its shape , which in fact would remember the movement of water ( waves ).
The Kabbalists recognize in this symbol one of the ” mother letters ” , cosmic manifestation , symbol of material disembodiment , of detachment from all that is corruptible and from the mystical death ; they , in fact , think that the symbol ” m ” has a fluidity function on the metaphysical plane.
In Masonic context , the ” M ” followed by three dots in a triangle shape, represents the Master Mason, that is he who holds the third degree of our Free Mason Order.
And now , after ” millennial ” digressions , like Neo in Matrix , we hang up the phone until the next post .